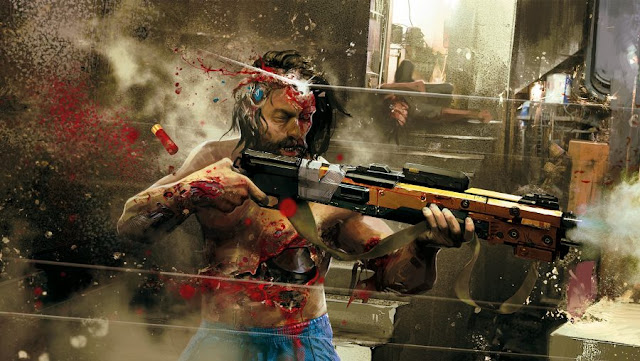 Again R. Talsorian has given us an update about the upcoming Cyberpunk Red. Just last week we learned how netrunning is going to work and today they detailed how combat is going to work. Some of what they revealed is only going to apply in the Cyberpunk Red Jumpstart Kit and the rest will be detailed in the core rulebook.

When shooting you will use your marksmanship skill against range to determine whether or not you hit. Unless the enemy has a reflex skill higher than 9, then you roll on an opposed check. Range will be divided into seven segments. Obviously a shotgun will do better at close range and something like a sniper rifle is better at a distance.

Autofire will be treated differently but in the Jumpstart Kit only suppression will be addressed. Suppressive fire will not do damage, but instead will cause the enemy to run into cover.

Armor has SP (stopping power). All damage is subtracted from the SP and the rest hits your characters hit points. When you are damaged your SP is lowered by one until you reach zero. At that point your armor is broken. Melee opponents have a significant advantage against armor. Melee weapons half an opponents SP and brawling damage completely negates it.

If you are reduced to less than half of your hit points you will be severely wounded. When this happens you will incur a penalty on all your rolls. Now if you hit zero this is where it gets good. You incur an even greater penalty to all your checks except a death save. You roll your death save at the beginning of every turn. If you succeed you can take an action that turn. Every time you pass your save the next turn you receive a -1 to your death save roll. If you don't pass your roll, well you guessed it, you die. In order to pass this roll you must roll under your Body skill on a d10.

In order to regain hit points you must successfully pass a First Aid check. The lower in hit points you are the harder it is to pass the check. If your first aid check succeeds when you are at zero hit points it automatically bumps you up to one. After that, the patient recovers their Body stat in Hit Points per day spent resting.

So that is everything that we have learned about the combat system in Cyberpunk Red. It may sound a little daunting at first but once you have this system down it will be like clockwork. I'm excited to get my hands on the kit and I'm eager to see what R. Talsorian will reveal next week.
Posted by LuketheGoon