For a few years I played the Warhammer Fantasy tabletop skirmish game. I've always wanted to get back into the hobby but none of the settings have really grabbed me enough to put that amount of money back into the games. Today Osprey Games announced a game that might just draw me back in that takes place in a cyberpunk dystopian future, Reality's Edge.

Reality's Edge will be a 28mm wargame in which you play a Showrunner, a powerful mercenary who leads a team of trusted operatives and disposable freelancers. This will be a campaign game, which means you will save your progress and advancement. Which means you can get better equipment and of course, chrome. 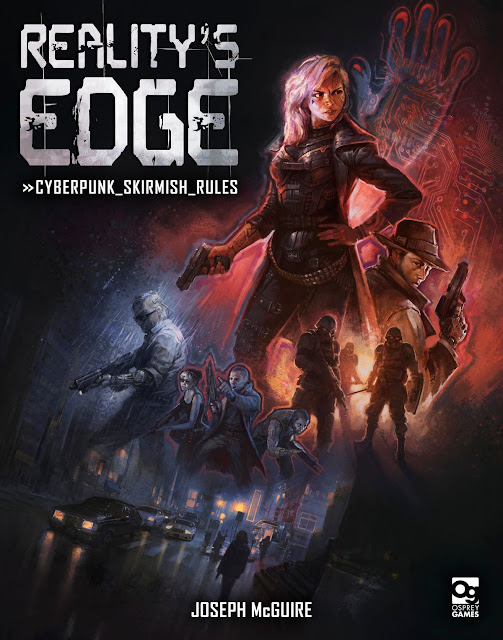 
Crew Diversity. Your Showrunner can hire numerous types of operatives, though only two of each, who bring unique skills to the crew. Sprawl ronin are deadly combatants with the ability to react before their opponents can go, while infiltrators stalk the shadows hunting targets of opportunity. Other exciting options include console cowboys, cyborgs, street docs, and more to give your unique crew lots of potential.

Cyberspace. Not just an afterthought or bolted on, Reality’s Edge hacking rules are pivotal to game play. Showrunners are accompanied onto the battlefield by their shadowbacker’s avatar. The avatars hunt virtual space looking for targets while countering your opponent’s avatar. Should they wish, your Showrunner can be accompanied by console cowboys; combat hackers who interface with local technology. Hacking allows you to breach network nodes, break enemy technology, and gain control of drones and robots. With over 20 different hacking apps in the game, your hackers have lots to do.

Dirty Jobs. The Showrunner accepts jobs from nebulous sources and it is entirely possible multiple teams have accepted the same job, which can complicate things. There are 10 scenarios the book, which means plenty of ways to get paid.   Further, before each game, players roll on the Hitch table, representing all the unique challenges of the sprawl.  From chemical pollution blocking line of site, to drug- addicted maniacs rampaging through the local sector. With so many job variables, players never have to play the same game twice.

Dark Agendas. When playing a campaign, your Showrunner is associated with a shadow backer who can provide unique access or other benefits.  You can serve the interests of a corporation, a Gov.Mil  black-ops group, a criminal syndicate, a hacktivist collective, and more.

The Sprawl. Out in the streets your crew is not alone. Independent forces are in play and your team may come up against foes who may not oppose you directly, but are still in your way. Crowds of civilians can impede your crew or provide a nice place to hide from their enemies.  But more dangerous foes include law enforcement, street punks, private security forces, and various other nasties that call the dark alleys of the Sprawl home.

Experience Counts. By playing games and earning experience points, your Showrunner and their few select employees can improve themselves and acquire better equipment.  Be careful though as you let operatives into your inner circle, their fate becomes entwined with yours and expect a bigger cut of the pie. While they will not be as good as your in-house support, freelancers are cheaper and definitely more disposable.

If this sounds like something you are interested in you can pre-order the game right now. As a bonus you won't have to wait too long because the book will be released on August 20th, 2019.
Posted by LuketheGoon