5 Films to Watch in Anticipation of Cyberpunk 2077

April 16th, 2020 seems like a lifetime away. So what do you do to pass the time? If you really want to envelop yourself into the cyberpunk genre than I have the perfect list for you. Here I am going to list five films that you should definitely watch in anticipation of Cyberpunk 2077. These films will most likely have had some kind of impact on the game, some of which we already know because of the promotional material.

Altered Carbon is a Netflix original series that is based off of the novel of the same name by Richard K. Morgan. The series takes place over 360 years in the future, with most episodes set in the year 2384, in a futuristic metropolis known as Bay City. In this dystopian universe people can upload their consciousness onto what is called a stack and your body is simply referred to as a sleeve.

Takeshi Kovacs is a special soldier that is referred to as an Envoy, talented operatives with deadly skills. The story begins when Kovacs' stack is retrieved by a wealthy man who wants his "murderer" brought to justice. Season one is all on Netflix and the series was recently renewed for a second season. 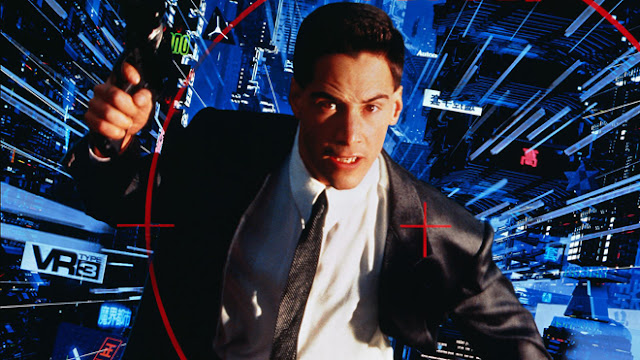 With this film I think the connections to Cyberpunk 2077 are quite obvious at this point. The film stars Keanu Reeves and is based on a story written by the Godfather of cyberpunk, William Gibson. CD Projekt Red have directly talked about the film and they even have a particular melee weapon in the game based off of the one Keanu uses in Johnny Mnemonic.

Judge Dredd seems to always be left out when it comes to talking about cyberpunk. If you really enjoyed the first 48 minute gameplay demo than you will love Dredd. This movie is brutal and unforgiving. Blood, gore and action at a mile a minute. The entire film takes place in a tenement megabuilding where a gang has gone off the rails. If The Raid was cyberpunk and used guns you would get Dredd.

3. Ghost in the Shell

This is where the list is probably going to start to get a little predictable. But I think when we are talking about cyberpunk these following films absolutely have to be mentioned. Ghost in the Shell is one of the most well known and fantastic anime you will ever see. It should be obvious but I am not talking about the Scarlett Johansson film.

Akira is the most influential anime of all time. No question. It also just happens to be cyberpunk to the core. This is one of those movies that everyone knows about, but not many people have actually seen. This is also on this list because it is clearly the inspiration for the motorbike statue that is included with Collectors Edition of Cyberpunk 2077. For that reason alone I think this movie is definitely worth checking out.

Blade Runner is the granddaddy of cyberpunk film. I couldn't make a decision between the original or 2049 so I am going to cheat a little and include them both here. The imagery and themes are without a doubt going to be explored in Cyberpunk 2077. Especially when it comes to your humanity and what can happen when we push things too far. We have already seen a direct easter egg in the demo when the woman from the ripper doc office is clearly an homage to Pris from the film.

Well those were five (technically six but whose counting?) films for you to check out while we are all waiting for Cyberpunk 2077 to release. These aren't the only good cyberpunk films out there to check out. Plenty of cyberpunk literature is also worth checking out as well. Stay tuned because very soon I will be sharing an article I wrote last week about five games to play.

In the meantime I hope you guys enjoyed this list and if not let me know what you would suggest. Do you know of any hidden cyberpunk gems? Let me know!
Posted by LuketheGoon