Today R. Talsorian dropped another blog post with quite a bit of new information considering the upcoming release of the Cyberpunk Red Jumpstart Kit. In the last update they revealed that Q Workshop will be providing the kit with some new dice. Now we are getting a look at some of the pregen characters that will be included in the set.

In the kit they are calling them "Edgerunners" and they are emphasizing that all of them are completely customizable. They are simply going to be presented as a canvas that you can expand upon and make your own. Of course, as with most starter boxes, all of the characters represent a different "class". 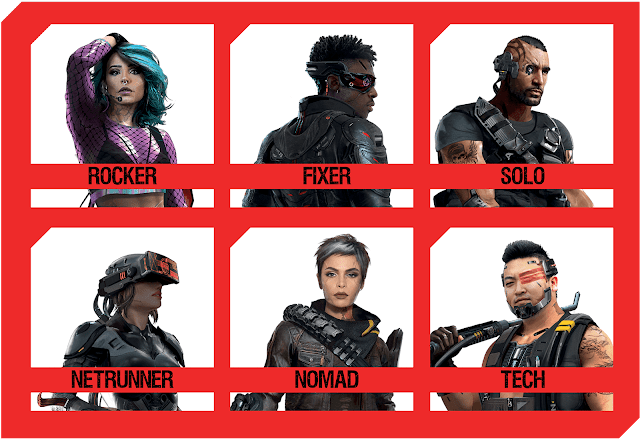 In the post they also go over all of the different stats that we will be able to dump all our points into. Most of us will be really familiar with them but with all the hype around Cyberpunk 2077, new people will have to be introduced to them.
In the kit they are also really simplifying health by only including "hits". This will definitely streamline the game for new audiences and could be something nice to bring over to the full release as well to keep it simple. Lifepath will be present here as well and it will be the primary way to really dig deep to fully customize your character. The skills, gear and cyberware all seem to be predetermined for each Edgerunner. Keep in mind however that you don't even have to use these characters. They are just there if you want to jump in fast and get a game going with minimal prep work.

The art we see for the Edgerunners looks very similar to the artwork we have already seen. We've been told that plenty of other art will be available which is my hope. I'd like to see something that will differentiate Cyberpunk from Shadowrun in terms of art style.

You can get your hands on the Cyberpunk Red Jumpstart Kit at Gen Con on August 1st at the R. Talsorian booth or digitally on DriveThruRPG. After Gen Con the kit will be available in stores and in the R. Talsorian webstore as well.