As I said in my last post, I have been digging through the Cyberpunk Community Podcast for all the info I could get. So I watched the nearly two hour long podcast and I took notes of all the important tidbits. They discussed a lot of different topics and touched a little bit on the upcoming game Cyberpunk 2077 but R Talsorian's media manager, J Gray, remained very tight lipped about the video game. However, he revealed a LOT of very relevant information on Cyberpunk Red.

First, and most importantly, the game will not be coming out at Gen Con this year. Well, not the core rulebook anyway. They will be releasing a "Jump Start Kit" which is essentially a Beginner Box. This set will include two books, Lore and Adventure and Core Rules. The lore book will also include the Scream Sheets that I really enjoyed from 2020. It will also include two 10 sided dice and four 6 sided dice. The price isn't locked down yet, but he hinted that the price would probably range from $20 to $30.

The box will be available at Gen Con and immediately on DriveThruRPG the same day. As soon as they can they will be putting physical copies up on several retailers. The box will also include six pregens including Nomad, Solo, Netrunner, Fixer and Tech.

My earlier post showed off the art that he unveiled during the stream. According to J, the Arasaka logo is not finalized so we can't count on them actually being in the game. He also noted that the police featured are not necessarily from Night City. All of the art will be from all over and not just Night City.

On top of all those important details we learned a couple other tidbits from the interview. The game will still be feeling the effects of the Fourth Corporate War. This in turn will change the way netrunners work. The net was devestated and that will have far reaching affects.

New netrunner rules are a big thing that will be updated. I think everyone who has ever played Cyberpunk 2020 will know the pain of running those rules. Perks will also be implemented like in Fallout, which makes me curious if we can also take flaws to take more perks. Multiclassing will also be a much easier thing to do.

One interesting bit of info is why Red was delayed. On one hand I don't think the game was entirely ready to go from listening to the podcast. But also apparently the production of 2077 also was apart of the delay. Gray said that they didn't want to finalize anything just in case CD Projekt Red added anything to the game that they want to address in Cyberpunk Red. He also said that all the artwork is going to take time to get commissioned.

Lastly he mentioned that expansions are in the works. Of course these expansions won't roll out unless Red does well. Gray also commented that since the announcement of 2077 sales for the table top game have gone up by 400% which is great news. I'm hoping Red does just as well. Now with the built in Cyberpunk audience and the resurgence of table top RPGs, I think they will do well.

So that was the TLDW of the Cyberpunk Community Podcast. But if you do have the time I urge you to give it a listen. I couldn't possibly cover everything that they did in this post. Not to mention they are good people expanding the community on Youtube. You can watch and listen to the podcast over on Youtube. Below you can check out my own mock up of the Jump Start Kit below. This isn't official people.. But you know R Talsorian if you are reading this, I'm for hire! 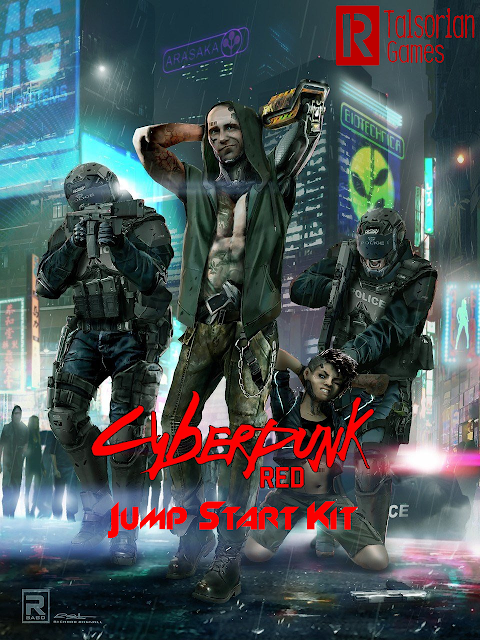