Shadowrun Sixth Edition: What We Know So Far

About a week ago it was announced that Catalyst Game Lab were going to release the sixth edition of Shadowrun. With that announcement they sent out several Beginner Boxes to people within the community. The Shadow Casters Network has been answering a lot of questions fans have about the game and have been streaming some actual plays as well.

The information that people have gathered about the game has come from the discussions that SCN has had on their streams. They have done a couple Q&A's as well. Luckily you won't have to go back and watch all those archived streams. The community has come together and prepared a document that contains all the information that we know so far.

We know the Beginner Box will be out in June and we can expect the core rulebook to be come out just in time for Gen Con in August. That's gonna be a tough month for some with Cyberpunk Red occupying the same release window.

As I mentioned above check out the Google doc for every thing we know so far including all mechanics. 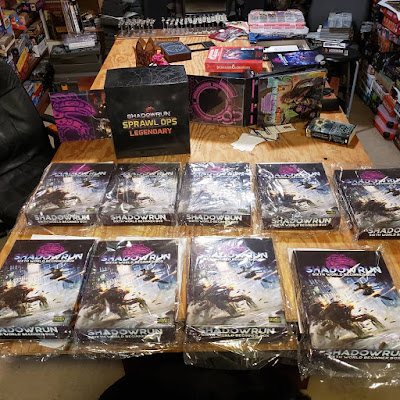 Are you ready to risk everything?

The Sixth World. One of the most enduring RPG settings ever created, with shadows growing deeper and darker in its latest edition. Dominated by enormous, world-striding megacorporations strangling metahumanity in their clutches, by 2080 most of the planet has surrendered to these corporate overlords.

But from the darkest shadows, defiance flickers in people known as shadowrunners. They risk everything—wrestling magical energies, channeling them into power; putting their minds against the electronic void of the Matrix; trading flesh and blood for chrome and steel.
Stand up, join them, and dare to risk it all!